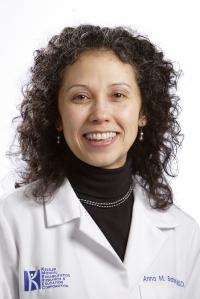 Barrett’s extensive experience brings together training in cognitive neurology and neuropsychology, neurology, medicine and brain injury. Her research program encompasses brain-behavior relationships relevant to spatial cognition and rehabilitation of spatial neglect; person-centered care and outcomes relevant to function and life participation; and identification and management of hidden disabilities and mechanisms of deficit unawareness.

Board-certified in neurology, behavioral neurology and neuropsychiatry, and brain injury medicine, Barrett earned her medical degree at New York University School of Medicine. She completed an internship at Norwalk Hospital/Yale University School of Medicine, neurology residency at Columbia University/the Neurological Institute of New York, and fellowships in behavioral neurology and neuropsychiatry neuropsychology at the University of Florida. She is a fellow of the American Academy of Neurology, the American Neurological Association and the American Society of Neurorehabilitation. She is also a fellow of the Hedwig van Ameringen Executive Leadership in Academic Medicine Program for Women at the Drexel University College of Medicine. Throughout her career she has mentored and advised dozens of faculty, medical students, PhD candidates, undergraduates, residents and fellows.

“We are grateful to Dr. Silver for so enthusiastically and ably serving as interim chair following the tenure of Dr. Brown. Thanks also to search committee members for their commitment to bringing a colleague of Dr. Barrett’s stature to our faculty,” said Provost Flotte.

“We congratulate Dr. Barrett and welcome her to the UMass Chan Medical School community.”

“A state-supported public medical school for Massachusetts was established by the commonwealth in July of 1962; the founding dean, Lamar Soutter, was appointed in December of 1963 and began the execution of a vision for an extraordinary medical school. “I think that if you're starting a medical school from scratch,” he said at the time, “you can say alright, let's get this science of medicine very firmly rooted in the students' minds—but then let's take them back to the bedside and make them much better practitioners and much more interested in taking care of human beings even though they are making full use of laboratory procedures and scientific advances.”

Although the location in Worcester as a campus of the University of Massachusetts wasn’t selected until 1965, preliminary accreditation and the recruitment of core faculty during the construction process meant that the first class of 16 students entered in the fall of 1970, beginning their studies in a former warehouse at the corner of Lake Avenue and Belmont Street (a building still used today by UMass Chan Medical School). By the time the first class graduated in 1974, the new medical science building was in use, followed by the teaching hospital, which opened in 1976. The growth of the school and its clinical system coincided neatly with support for basic science research and while the school remained true to its mission of training primary care physicians, by 1979 it had established a PhD program in the biomedical sciences, which became a school in its own right, followed by the Tan Chingfen Graduate School of Nursing, which opened in 1986.

A period of expansion began in 1990 with the appointment of Aaron Lazare, MD, as dean and, subsequently, chancellor, who would go on to become one of the longest-serving leaders of a medical school in the United States by the time he stepped down in 2007. With the acquisition of the former Worcester Foundation for Biomedical Research and the Massachusetts Biologic Laboratories and the spinoff of hospital operations into a new clinical system, the campus entered a period of unprecedented growth. A new research building opened in 2001 and the original medical school and hospital buildings were extensively renovated and expanded to include new meeting, educational, emergency and surgical spaces. Research funding grew for a time at a rate faster than any other academic health sciences center in the country, fueled by recruitment of basic science faculty drawn to the institution's prominence in several fields, including gene function and expression, gene development, biochemistry, and molecular medicine. In 2006, UMass Chan professor Craig C. Mello, PhD, won the Nobel Prize in Medicine, shared with Stanford researcher Andrew Fire, PhD, for their discovery of the mechanism of gene silencing by double-stranded RNA, which they termed ‘RNA interference.’

The Nobel Prize drew attention and support to UMass Chan Medical School throughout the commonwealth; the University of Massachusetts created a Life Sciences Task Force that proposed a series of strategic investments in biomedical sciences education, research and infrastructure across the five campuses; many of these recommendations were mirrored in the commonwealth’s own Life Sciences Initiative, a ten-year, billion-dollar plan for investment. The Life Sciences Task Force was chaired by Michael F. Collins, MD, at the time interim chancellor at UMass Chan Medical School and senior vice president for the health sciences at the University. Along with Terence R. Flotte, MD, a prominent figure in the field of gene therapy, who became the eighth dean of the T.H. Chan School of Medicine in 2007, Collins has overseen the latest phase in campus development and investment, including the expansion of the medical school class size to its current cohort of 125; investment in educational technology and infrastructure, and expansion in clinical and translational science, which began with the establishment of a PhD program in Clinical and Population Health in 2005; the creation of the Department of Quantitative Health Sciences in 2009; and the receipt of an NIH Clinical and Translational Award in 2010. Two major facilities investments on the UMass Chan Medical School campus have laid the groundwork for the next generation of life sciences education and research: the 278,000 square-foot Ambulatory Care Center, home to Centers of Excellence in Diabetes, Cardiovascular Medicine, Orthopedics and Cancer, which opened in 2010; and the 500,000 square foot Albert Sherman Center,  which opened in 2013 and houses state of the art facilities for medical education, including homes for the learning communities; the standardized patient program; dedicated seminar and conference space; and six floors of wet and dry laboratory space for new research initiatives in population health, RNA biology, gene therapy and neurodegenerative disease.

In September 2021, Chancellor Collins announced a history-making gift of $175 million from The Morningside Foundation to the Medical School. Calling the gift a “powerful statement about the stature—and the potential—of our medical school,” Collins said the confidence it conveys about the Medical School is breathtaking, “permitting us to recruit renowned and innovative faculty, conduct more breakthrough biomedical research, offer financial support to highly qualified and diverse students; and be ever more expansive in fulfilling our public service mission.” The Morningside Foundation said in a statement that, “The Morningside Foundation and the Chan family are proud to honor their patriarch and matriarch’s legacy and their deep commitment to the advancement of health and education. There is a powerful alchemy and very special culture at UMass Medical School in which the whole is greater than the sum of its parts.””