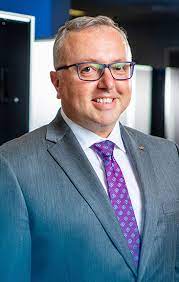 Mager, an internationally recognized pharmaceutical scientist with a record of accomplishment in pharmacokinetics and pharmacodynamics, received his BS in pharmacy from UB in 1991 and his PharmD and PhD from UB in 2000 and 2002. He completed post-graduate training as an Intramural Research Training Fellow at the National Institute on Aging, National Institutes of Health, Laboratory of Clinical Investigation in 2004.

He was first appointed to the faculty in 2004, granted tenure and associate professor in 2010, and promoted to full professor in 2016 and began his tenure as vice-chair in 2017. During his tenure, he served as interim director of undergraduate studies for the Department of Pharmaceutical Sciences,

“Don joins a long line of truly distinguished chairs to emerge from the faculty. I have profound respect for the history of this department and its unique role in the development of the pharmaceutical sciences, and unbounded optimism for its continued success under Don’s stewardship,” said Gary Pollack, dean of the School of Pharmacy and Pharmaceutical Sciences.

“I also want to acknowledge and thank Dr. Marilyn Morris, who has provided outstanding leadership as chair for the past six years. She is leaving an extremely strong foundation upon which Don can build.”

Morris led many key initiatives during her six years as chair, including the establishment of a program in systems pharmacology, protein engineering and biologically-based drug delivery supported by a $1 million investment from the State University of New York Empire Innovation Program, along with the launch of a new Master of Science degree program in pharmacometrics and personalized medicine.

Mager has a strong history of leadership, collaboration and service. He has been an associate/consulting editor of Pharmacometrics and Systems Pharmacology, Journal of Pharmacology and Experimental Therapeutics, and Pharmacology, Research and Perspectives.

He is currently a fellow and president of the American College of Clinical Pharmacology, and is an appointed fellow within multiple scientific organizations including the American Academy for the Advancement of Science, American Association of Pharmaceutical Scientists, and the International Pharmaceutical Federation.

“I am deeply humbled and honored to be named the next chair of the Department of Pharmaceutical Sciences. I would like to add my appreciation for Dr. Marilyn Morris and past chairs Drs. William Jusko and Ho-Leung Fung for their outstanding stewardship,” says Mager.

“Our department has a rich tradition of excellence, and I am excited to be working with all members of our department and school in upholding this tradition while advancing the discovery and dissemination of new knowledge in pursuit of innovative and improved therapeutics.”

He has received consistent federal and industry funding over his career, published over 155 articles in peer reviewed journals and has been an invited presenter at over two hundred national and international meetings and symposia.

About Jacobs School of Medicine and Biomedical Sciences:

“From our founding as a medical school in 1846, to paving the way for future physicians, the Jacobs School of Medicine and Biomedical Sciences builds upon its proud legacy of teaching, patient care and scientific discovery.”

To advance health and wellness across the life span for the people of New York and the world through the education of tomorrow’s leaders in health care and biomedical sciences, innovative research and outstanding clinical care.“

1. Integrative and Systems Pharmacology of Anti-Platelet and Anti-Cancer Drugs

4. Development of models of pharmacological target-mediated drug disposition and dynamics, and the experimental validation of the primary determinants of PK/PD profiles of drugs that exhibit such phenomena.

5. Development of non-deterministic models such as neural networks, alone or in combination with traditional adaptive feedback control methods, for individual optimization of complex pharmacotherapeutic regimens.

6. Incorporation of biomedical signal processing tools into PK/PD models for characterizing the pharmacology of drugs that alter spontaneous variability of signals of the cardiovascular and autonomic nervous systems