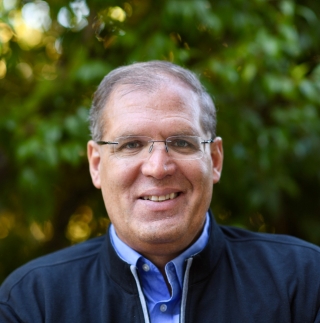 Garry Gold, MD, professor of radiology, has been named chair of the Department of Radiology. His appointment began April 16.

Gold, who has been a clinician, researcher and educator at Stanford for 22 years, served as interim chair of the department beginning in July 2020, when the previous chair, Sanjiv Sam Gambhir, died. Gold has dedicated his career to understanding osteoarthritis through magnetic resonance imaging, using the technique to inspect bone, cartilage, ligaments, tendons and muscles around joints. As chair, he embraces a vision of his predecessor: creating technology to diagnose diseases as soon as possible.

“Dr. Gold is one of the nation’s foremost radiologists – demonstrating an ability to innovate and advance the field of radiology throughout his time at Stanford Medicine,” said Lloyd Minor, MD, dean of the Stanford University School of Medicine. “Guided by his expert leadership, the Department of Radiology will continue to drive one of the most critical parts of Stanford Medicine’s precision health vision: detecting disease in its earliest stages.”

For years, early detection has been a focus of Stanford’s Department of Radiology, even though it’s not typically part of a radiologist’s repertoire.

“Our research footprint in radiology has expanded tremendously in the past decade,” Gold said. “We started working in areas that a traditional radiology department wouldn’t pursue as their primary goals, including early detection of cancer with liquid biopsy, a technique that uses blood or fluid sample to detect disease, and molecular imaging to characterize physiological processes in the body.”

The idea is to keep people healthy, preventing the need to go to the hospital in the first place — and, when disease strikes, to treat the condition before it’s progressed too far.

One of Gold’s primary goals for the department, he said, is to build on the interdisciplinary environment of Stanford Medicine to maximize the impact radiologists can have in emerging specialties.

“For example, we could combine wearable technology with imaging to assess progression of osteoarthritis in middle-aged adults, or combine tissue sample analysis with novel molecular imaging to detect lung disease,” he said. “There are lots of ways we can leverage the different expertise in our department to forge connections and translate our discoveries from basic science into the clinic.”

Alongside his chair appointment, Gold is the director of Stanford’s Precision Health and Integrated Diagnostics Center, and the co-director of the Wu Tsai Human Performance Alliance. Gold also chairs the National Institutes of Health’s Clinical Translation and Imaging Study Section and is the deputy editor of the Journal of Magnetic Resonance Imaging. His research has been published in more than 200 peer-reviewed papers, and his innovations have garnered him 10 patents.

Gold emphasized the importance of expanding the Department of Radiology’s advanced imaging capabilities to communities throughout the San Francisco Bay Area. “One of my goals, clinically, is to improve access to the care founded by the imaging technology at Stanford. Our technology, expertise and interpretations are very much in demand, so it’s important that we find ways to increase our capacity while making sure we’re providing care in a cost-effective manner.”

Gold also plans to foster a culture of respect and inclusion within the department. “That means we recognize and appreciate everyone’s contributions, from the chair to the undergraduates to the many staff, administrators and health care professionals at the hospital,” he said.

About Stanford University School of Medicine:

"A leader in the biomedical revolution, Stanford Medicine has a long tradition of leadership in pioneering research, creative teaching protocols and effective clinical therapies.

Our close proximity to the resources of the university — including the Schools of Business, Law, Humanities and Sciences, and Engineering, our seamless relationship with our affiliated adult and children’s hospitals, and our ongoing associations with the entrepreneurial endeavors of Silicon Valley, make us uniquely positioned to accelerate the pace at which new knowledge is translated into tangible health benefits."

Garry E. Gold, M.D., is a clinical radiologist and an active investigator specializing in patient-oriented research. Following completion of his Master of Science in Electrical Engineering from Stanford University in 1988, Dr. Gold earned his medical degree in 1992 from the Stanford University School of Medicine. In 1993, he began the Stanford Department of Radiology Residency Program, during which he spent two years serving as an NCI Cancer Imaging Fellow from 1995-1997 under the supervision of Dr. Albert Macovski. After board certification in Radiology, Dr. Gold became an Osteoradiology Fellow at the University of California in San Diego under Dr. Donald Resnick from 1998-1999. He was appointed an Assistant Professor in Stanford’s Department of Radiology in January 2000. In 2006, Dr. Gold became an Associate Professor with tenure in the Department of Radiology. In 2011 Dr. Gold was awarded the first phase of this K24 project which has produced many successful clinically oriented researchers (see tables). In 2012, Dr. Gold was promoted to Professor of Radiology and by courtesy Bioengineering and Orthopaedic Surgery. He was also appointed as the Associate Chair for Research in Radiology at Stanford. In 2017, Dr. Gold was appointed as Vice Chair for Research and Organization in the Department.

Dr. Gold has earned an international reputation as a clinical radiologist and patient-oriented researcher specializing in osteoarthritis and translational MRI development. His unique background in electrical engineering and radiology has resulted in over 200 peer-reviewed articles and eight successful patent applications. He is Past President of the International Society for Magnetic Resonance in Medicine (ISMRM) and the Society for Computer Body Tomography and Magnetic Resonance (SCBT/MR). In recognition of his widely respected research and mentoring, he has won multiple honors, including the SCBT/MR Lauterbur Award multiple times. In 2011 he was named a Fellow of the ISMRM and Academy of Radiology Research Distinguished Investigator. In 2013 he was named Faculty of the Year for Stanford Radiology. In 2016 Dr. Gold was named as a Fellow of the American Institute for Medical and Biological Engineering (AIMBE).