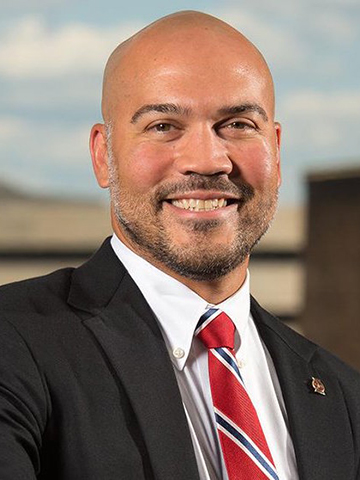 Following a national search, Saint Louis University has selected Bernard “Bernie” Rousseau, Ph.D., MMHC, CCC-SLP, ASHA Fellow, to serve as the next permanent dean of its Doisy College of Health Sciences. His appointment is effective July 1.

Rousseau is the associate dean for equity, inclusion and community engagement at the University of Pittsburgh School of Health and Rehabilitation Sciences. He also serves as the chair of the Department of Communication Science and Disorders, one of the school’s largest departments with 300 students across five academic degree programs and a non-degree post-baccalaureate certificate.

“I am incredibly excited to have Dr. Rousseau join our team here at SLU,” said Saint Louis University Provost Michael Lewis, Ph.D. “He will be a transformational leader for the institution and will expand the reach of our programs through innovative programming and curricular development. As a world-class researcher, he will dramatically enhance our scholarly reputation. His work and approach to instruction and research align with SLU's Jesuit mission.”

Rousseau has served as chair of the Department of Communication Science and Disorders at Pitt since 2018. His numerous accomplishments as chair include:

In addition to leading an academic department, Rousseau has served as the school’s associate dean for equity, inclusion and community engagement since 2020. His leadership of a $2.8 million school-wide, cluster-hire initiative led to the funding of four new faculty positions to address research in the social determinants of health and well-being.

Rousseau’s own federally funded research program is recognized nationally and internationally for its use of innovative experimental approaches in the fields of otolaryngology, hearing and speech sciences, and mechanical engineering. He is the principal investigator of two National Institutes of Health R01 research grants and has maintained continuous NIH funding for more than 14 consecutive years. He has mentored more than 60 research trainees in his laboratory, many of whom have had success at top research universities across the country.

“I would like to thank President (Fred) Pestello and Provost Lewis for this incredible opportunity to lead the Doisy College of Health Sciences at Saint Louis University,” Rousseau said. “This is an exciting time at the University with expanding enrollment, a healthy endowment and major institutional investments in the community.”

Rousseau will succeed Tricia Austin, Ph.D., PT, ATC, who has served as interim dean of Doisy College since October 2020 when the dean at the time left SLU to become the provost of Creighton University.

“Dr. Austin’s steady leadership and commitment have helped to keep the college on track to meet its goals and lay the foundation for Dr. Rousseau to continue the important work of the college when he arrives this summer,” Lewis said.

About Doisy College of Health Sciences at Saint Louis University:

Bernard Rousseau, PhD, MMHC, CCC-SLP, American Speech-Language-Hearing Association (ASHA) Fellow, is the SHRS Associate Dean for Equity, Inclusion and Community Engagement, and professor and chair of the Department of Communication Science and Disorders. Dr. Rousseau is a fellow of the American-Speech-Language-Hearing Association (ASHA) and an Associate Fellow of the American Laryngological Association.

Dr. Rousseau has over 17 years of experience actively engaged in academic and clinical translation in voice disorders. He has held continuous funding from the National Institutes of Health (NIH) for more than 14 consecutive years as principal investigator. He has more than 6 years of experience in higher education administration and leading large teams and departments (as associate vice chair, chair, associate dean). Dr. Rousseau has trained over 60 research trainees in various capacities in his federally funded laboratory (undergraduate, graduate, predoctoral, postdoctoral), including 10 postdoctoral fellows and 4 predoctoral fellows who have successfully transitioned into academic clinical, research, and teaching careers.