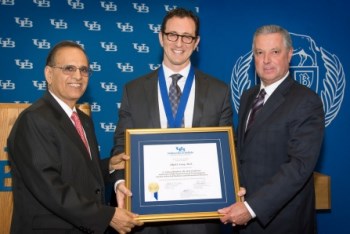 The University at Buffalo Jacobs School of Medicine and Biomedical Sciences recently announced the installment of neuro- and endovascular surgeon, Elad Levy, MD, MBA as the inaugural L. Nelson Hopkins III, MD, Professor and Chair of the Department of Neurosurgery. He joined the department in 2004 and became chair in 2013.

Levy has published over 300 peer-reviewed articles and given lectures nationally and internationally. He also directs UB’s stroke research program and had led many innovations in stroke research, including the international SWIFT PRIME trial, which showed that use of a stent retriever in thrombectomies, excision of a clot from a blood vessel, can improve patients' long-term outcome. This study was published in the esteemed New England Journal of Medicine.