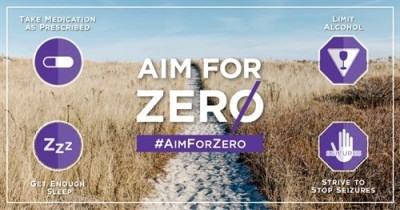 The Epilepsy Foundation’s SUDEP Institute recently began an initiative to educate patients and doctors about sudden unexpected death in epilepsy, or SUDEP. The foundation reports that each year more than 1 out of 1,000 people with epilepsy die from SUDEP. If seizures are uncontrolled then the risk of SUDEP rises to about 1 out of 150. The new public health campaign will aim to raise awareness and educate people about how to prevent SUDEP. It will spread the word on social media through the hashtag #AimForZero.

One reason the institute began this campaign is because it recognizes that doctors and patients may not be discussing the risk of SUDEP because its uncomfortable or scary to talk about. Orrin Devinsky, MD, FAAN, professor of neurology at the New York University (NYU) School of Medicine, and director of the NYU Langone Comprehensive Epilepsy Center and North American SUDEP Registry is the advisor to the Epilepsy Foundation's SUDEP Institute. He says, "There is a disconnect between what neurologists know and what they share with patients and families. This may reflect a desire to protect [patients] from upsetting information, but our responsibility is to educate and empower patients and families to improve seizure control and reduce harmful consequences of seizures."

Awareness will also address the misconception held by many epilepsy patients and loved ones of those with epilepsy that patients who have seizures infrequently or in a predictable pattern are not at risk of death. The campaign hopes to change this thinking by educating people that a person who has had any type of seizure is at risk for SUDEP, even if the patient has not had a seizure for years.

The campaign has established 4 ways to reduce SUDEP risk:

1. Take epilepsy medication as prescribed.
2. Get adequate sleep because sleep deprivation can trigger a seizure.
3. Limit alcohol intake because seizure medications can lower alcohol tolerance and alcohol can be a trigger for seizures.
4. Strive to stop seizures by talking to your doctor about the risk of continued seizures and SUDEP.