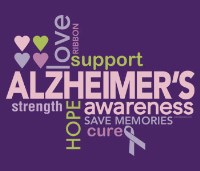 Yesterday on Wednesday, September 21, 2016 Alzheimer’s organizations around the world concentrated their efforts on raising awareness about Alzheimer’s disease. Alzheimer’s Disease is the most common form of dementia and a neurodegenerative disease that causes progressive brain cell death. Although age is the greatest known risk factor of Alzheimer’s, with most patients over 65 years old, Alzheimer’s is not a normal part of aging. Alzheimer’s has no current cure, but treatment for symptoms is available and research is underway. With the population of our country aging, it is important that resources are utilized to help those with Alzheimer’s find better treatments and a cure.

1. More than 5 million Americans are currently living with Alzheimer’s.

2. Alzheimer’s Disease is the 6th leading cause of death in the United States.

3. 1 in 3 seniors dies with Alzheimer’s or another form of dementia.

4. In 2015, more than 15 million caregivers provided an estimated 18.1 billion hours of unpaid care.

5. Family caregivers spend more than $5,000 a year caring for someone with Alzheimer’s.

6. Every 66 seconds someone in the United States develops dementia.

8. It is estimated that by 2050 13.8 million Americans will have Alzheimer’s barring any medical breakthroughs to prevent or cure the disease.

9. 61 percent of those with Alzheimer's are expected to die before the age of 80 compared with 30 percent of people without Alzheimer's.

10. In 2011, the NIH funded over $6 billion on cancer research, over $4 billion on heart disease research, but only $480 million on Alzheimer’s research.