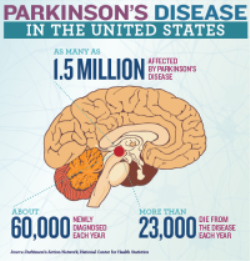 A team of researchers from the United States, Canada, and China recently published their results from a study that led to the discovery of a new gene linked to Parkinson’s Disease.

Parkinson’s disease remains the second most common neurodegenerative disorder without effective treatment. As many as 1.5 million people in the United States live with the disease. Onset is sudden and involves the malfunction and death of neurons in the brain that produce the neurotransmitter dopamine. Dopamine helps control movement of the muscles, so the death of neurons that produce dopamine leads to a stiffening and often loss of function in various muscles.

The new gene, TMEM230, is located on the short arm of chromosome 20 and codes for a transmembrane protein of secretory vesicles. A disease-linked TMEM230 gene with a mutation impairs synaptic vesicle trafficking, which the researchers showed is etiologically linked to Parkinson’s Disease.

TMEM230 was found in a large family with history of Parkinson’s disease, but researcher Joseph Jankovic, M.D. of Baylor College of Medicine says the gene may not be limited to familial Parkinson’s Disease: “This new gene could also be present in non-familial forms of the disease, which are the majority of the cases.”

Although researchers have previously found other genes linked to Parkinson’s Disease, TMEM230 paves the path for research into the link between Parkinson’s and the trafficking of vesicles that carry neurotransmitters across neuronal synapses.