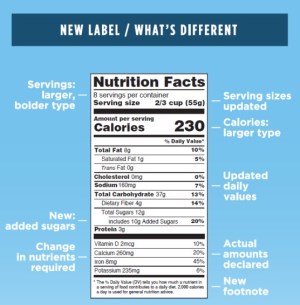 Although many neurological diseases result from genetic predisposition, environment certainly affects neurological health. At the foreground of this correlation is stroke. Several environmental factors increase stroke risk including artery disease, diabetes mellitus, and high blood cholesterol. In addition, high blood pressure greatly increases a person’s risk for stroke and in fact, remains the leading cause of stroke.

High blood pressure results from a number of conditions, but commonly arises due to an imbalanced diet. High sugar intake can cause fatty deposits to build up in blood vessels, which can lead to a stroke if enough build up occurs in a blood vessel supplying blood to the brain. Because of the cause-and-effect correlation between high blood pressure, fat build-up, and stroke, new rules increasing the transparency of food contents can help Americans control their stroke risk.

At the end of May, the Food and Drug Administration (FDA) released final rules for updating the Nutrition Facts label and serving sizes of food. The new rules require more transparency from manufacturers about food contents, which will help consumers make more informed choices when choosing foods to eat.
Increased transparency arrives in response to the nation’s large overweight or obese population, with nearly 1 in 3 children and almost 70 percent of adults classified as overweight or obese. The new rules will combat obesity by presenting Americans with more food information, thus increasing the control they have over food choices. A few of the most prominent changes include:

*Increasing the type size of “Calories,” “servings per container,” and “Serving size.” This makes crucial health information more prominent and easier to find on labels.

All of the changes made will presumably help Americans better monitor their diet, which leads to a lower incidence of high blood pressure.

Many believe that the decline of death from stroke results from increasingly focused and effective treatments of high blood pressure in recent decades. These updated guidelines will serve to increase the effectiveness of blood pressure monitoring, and ultimately help Americans reduce their risk of stroke.