University of Chicago Gearing Up to Reopen Adult Trauma Center

After years of protests calling for University of Chicago Medicine to reopen its long-shuttered adult trauma center, the South Side academic medical center is gearing up to do so.

U of C Medicine, a three-hospital campus in Hyde Park, is planning to soon formally submit an application to the Illinois Health Facilities and Services Review Board. The state regulators decide the fate of hospital projects to prevent duplicating existing services.

Keep a lookout for these five things:

1. The application is expected to address opening a Level 1 trauma center for adults.

Level 1 is the highest state designation for a center that treats the most seriously injured patients. According to a statement today from the health system, the application also includes a new state-of-the-art emergency department and expanded access to specialty services, and would restore a number of hospital beds.

A U of C Medicine spokeswoman said no details were available yet on the proposed cost of the project or its size. But experts have said launching and running a trauma center could cost at least $30 million a year. In September, when U of C Medicine announced it would not build a trauma center on its campus but instead partner with Sinai Health System to build one at its Holy Cross Hospital on the Southwest Side, the deal involved U of C Medicine giving Sinai a one-time payment of $40 million.

In December, the South Side system had a change of heart and decided to build its own trauma center on campus after all. 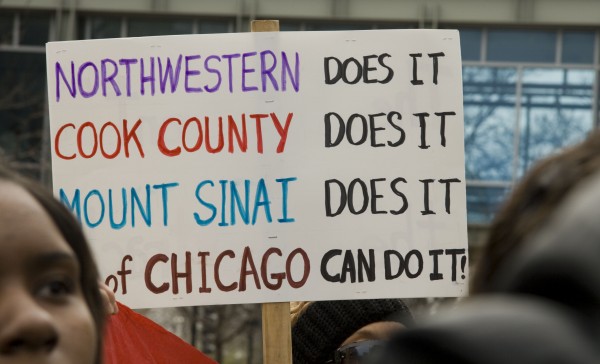 2. The lack of access to quality health care on the South Side will be part of the application.

The number of hospital beds in the area for patients has dropped 54 percent since the 1980s, the statement said. U of C Medicine also is one of the busiest hospitals in the Chicago area. Last year, the system had to turn away patients on 310 days, while others had to wait a long time before seeing a doctor, the statement said.

3. U of C Medicine is packed with patients and needs more hospital beds, the statement said.

About 81 percent of the beds at U of C Medical Center staffed by doctors, nurses and other providers were full at the facility's busiest time in 2014, according to a Crain's analysis of the most recent state data.

4. U of C Medicine has been meeting with community leaders to make sure its proposal passes muster.

It's not clear yet who the health system is meeting with or what those leaders have to say. But activists have for years claimed that the system ignored the community and called for it to open an adult trauma center after patients died because they had to go to other centers further away.

5. In a unique bureaucratic twist, if the facilities board approves U of C Medicine's plans, the system then will have to get permission from rival hospitals and the Illinois Department of Public Health to open the adult trauma center.

A committee of representatives from the six Chicago trauma centers must approve U of C Medicine's request. The system already has one vote—its own—because it has a pediatric trauma center. The other votes will come from Advocate Illinois Masonic Medical Center on the North Side; Northwestern Memorial Hospital in Streeterville; Ann & Robert H. Lurie Children's Hospital, also in Streeterville; John H. Stroger Jr. Hospital on the Near West Side; and, ironically, Sinai.