The UofL Board of Trustees on Thursday approved the hiring of Joseph S. Neimat, M.D., as chair of the Department of Neurological Surgery. Neimat was hired from Vanderbilt University where he has held a variety of positions: associate professor and the director of human neurophysiological research, neurotrauma, epilepsy surgery and the functional neurosurgery fellowship in the Department of Neurosurgery; and a founding member of the Vanderbilt Initiative in Surgery and Engineering. He was medical director of inpatient neurosurgery and neurosurgery operating rooms at Vanderbilt, and served on the curriculum planning committee of Vanderbilt University Medical School. 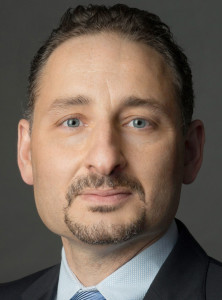 Neimat also was chief of neurosurgery for Tennessee Valley Health Care of the Veterans Administration and held joint appointments with Vanderbilt’s Center for Integrative & Cognitive Neuroscience, Psychiatric Neuroimaging Program and Department of Psychology.

“In Joseph Neimat, the UofL School of Medicine is getting a chair with an excellent balance of expertise in research, clinical care and medical education,” said Dean Toni M. Ganzel, M.D. “His knowledge and skills will greatly benefit our students, residents, patients and community.”

Neimat’s current research interests include investigation of the affective and cognitive properties of the basal ganglia – structures located deep in the brain that are responsible for normal movement. His research also examines the clinical application of neural stimulation in the treatment of refractory medical disease, or disease that is resistant to current therapies. He has received funding from the National Institutes of Health as well as from industry to support his research.

He serves as an ad-hoc reviewer for the NIH Study Section on Clinical Neuroscience and Neurodegeneration. He also serves on the Boards of Directors of American Society for Stereotactic and Functional Neurosurgery and the World Society for Stereotactic and Functional Neurosurgery. He is the lead or co-author of approximately 90 peer-reviewed articles, published abstracts and textbook chapters.

Neimat earned a bachelor’s degree at Dartmouth, double majoring in music and biochemistry, and then earned a master’s in neurobiology and a medical degree from Duke University. He completed his residency at Massachusetts General Hospital in Boston and a fellowship in functional neurosurgery at the University of Toronto. He is board certified in neurological surgery.