Pediatric Dentistry
Nemours/Alfred I. duPont Hospital for Children is seeking a board certified/board eligible pediatric dentist to serve on the faculty of Pediatric Dentistry. The incoming dentist will join the Division’s clinical and research enterprise amidst an exciting time of growth and change, marked by our transition into the brand-new, state-of-the art, $272 million and 450,000 square foot hospital expansion project which opened in October 2014

Integrated/multi-disciplinary medical and dental care
While there are many pediatric programs in the nation with similarly impressive standings, a distinguishing aspect of Nemours/AIDHC is the system wide prevalence of multi-disciplinary health care teams, including clinicians, dentists, clinical extenders, and skilled technicians. Pediatric dentists at Nemours/AIDHC participate as integral members of the medical team with regard to the integrated management of complex medical, developmental, behavioral, and restorative needs of patients requiring a wide range of medical care.

Pediatric Dental Home
Nemours/AIDHC is a long term supporter of the American Association of Pediatric Dentistry (AAPD) concept of a dental home for all infants, children, adolescents, and people with special health care needs (aka Pediatric Dental Home). Strong clinical evidence exists for the efficacy of early professional dental care complemented with caries-risk assessment, anticipatory guidance, and periodic supervision. Nemours/AIDHC leadership agrees that the founding of a Dental Home may follow the medical home model as a cost effective and higher quality health care alternative to emergency care cases.

Multi-Disciplinary health care
Many pediatric programs dissuade parents from pursuing regular, non-emergent dental care for their children due to a disconcerting location or an outdated sprawl of disjointed facilities. In contrast, the Nemours/AIDHC is a cutting edge, family accommodating facility beneficially located on the exquisite 300 acre grounds of the Nemours Mansion and Gardens located within a short drive of safe, economical, family focused communities.

Those receiving medical and/or dental care at Nemours/AIDHC benefit from the ability to schedule multiple provider examinations during the course of a single visit. The Nemours/AIDHC Dental Care Center provides conventional dental care in children with a wide range of medical complexities via large, teaching friendly operatories consisting of 6 chairs in the aggregate. Approximately 5,000 dental patient visits occur each year at Nemours/AIDHC, a number which is expected to grow dramatically in the near future. An experienced Sedation Team from the Department of Anesthesiology provides consistent and high quality care for outpatients in our Dental Care Center, and as needed in our surgical suite.

Treating complex medical conditions
In parallel with the massive clinical base amassed by Nemours/AIDHC since its founding in the mid-20th Century, Nemours/AIDHC has become an international referral center for children with complex medical issues including oncological and blood disorders, organ failure (heart, kidney, and liver transplant), neurodevelopmental disorders, and various genetic disorders including skeletal dysplasia. While adequate dental care is important to all children, the timely and effective provision of superior dental care is very important to children with medically complex conditions. Thus, each patient at Nemours/AIDHC is treated as needed by a multi-disciplinary medical/dental team that collaborates with regular frequency regarding individualized medical and dental treatment plans.

Support for a Pediatric Dentistry Residency Program is extensive as evidenced by the Garrett B. Lyons, Sr., DDS Pediatric Dental Program, designed to create a specialized pediatric residency in Dentistry with particular emphasis on children with special needs.
Regional dominance

The Nemours/AIDHC, located in Wilmington, Delaware is one of the nation’s premier pediatric health care systems, providing world-class clinical care in 4 states: Delaware, Florida, New Jersey, and Pennsylvania. We are the only provider of comprehensive pediatric health care in Delaware. In the latest rankings of U.S. News & World Report, Nemours/AIDHC was ranked in all 10 specialties including: oncology, cardiology & heart surgery, diabetes & endocrinology, gastroenterology & GI surgery, neonatology, neurology & neurosurgery, nephrology, orthopedics, pulmonology, and urology.

Nemours Foundation
The Nemours Foundation, a non-profit organization, was established in 1936 as the dying wish of industrialist, philanthropist Alfred I. duPont. At the time of his passing, Mr. duPont left behind a $40 million estate and last will with specific instructions that his estate would be used to provide health care services to children. His estate began to deliver on this vision in 1940 when the Alfred I. duPont Institute, a pediatric orthopedic hospital in Wilmington, Delaware, opened its doors.

Today, Nemours has grown to become one of the nation’s largest integrated pediatric health systems in the country; providing hospital- and clinic-based specialty care, primary care, prevention and health information services, and research and medical education programs aimed at improving the lives of children and families throughout the Delaware Valley and in Florida. Nemours/AIDHC is under the fiduciary management of The Nemours Foundation. The Foundation operates the Nemours/Alfred I. duPont Hospital for Children in Wilmington, Delaware; the Nemours Children’s Hospital in Orlando’s Medical City; and Nemours Children’s Clinics in Delaware, Florida, Pennsylvania & New Jersey. The foundation also sponsors the KidsHealth website, which provides information about the health, behavior, and development of children from birth to adulthood. The site has different content sections for children, teenagers and parents; approximately 850,000 people visit the link every weekday.

Nemours Alfred I. duPont Hospital for Children
As one of the nation’s premier pediatric health care systems, Nemours provides world-class clinical care in four states: Delaware, Florida, New Jersey and Pennsylvania. Located in Wilmington, Delaware, the Nemours/Alfred I. duPont Hospital for Children offers intensive and acute inpatient and outpatient services covering more than 30 pediatric specialties. Ranked among the nation’s best in pediatric specialty care by U.S. News & World Report, this world-renowned teaching hospital has served children from 42 states and 14 nations. Extending the world-class care of the Nemours/Alfred I. duPont Hospital, Nemours duPont Pediatrics provides expert care for even more children across the Delaware Valley through community-based physician services and collaborative partnerships with health and hospital systems.

To keep pace with the changing health care environment and build a healthier future for our children, Nemours has embarked on a multi-phase expansion to create a children’s hospital like no other in the region. Upon completion in October 2014, the hospital will include private patient rooms, a new Pediatric Intensive Care Unit and a new expanded Emergency Department.

Nemours, one of the nation’s leading pediatric health systems, has been recognized again by U.S. News & World Report (USNWR) for being among the best children’s health systems in the nation in the 2015-16 edition of Best Children’s Hospitals. In the latest rankings, Nemours duPont Hospital was ranked in 8 specialties including: cancer, cardiology & heart surgery, gastroenterology & GI surgery, neonatology, nephrology, orthopedics, pulmonology and urology.

Hospital Growth
In October 2014, a 450,000 square foot expansion of the Nemours/AIDHC will open to patient care. The $256 million project emphasizes patient and family centered details including 220-square-foot, single-patient rooms with an eye on comfort, including distinct areas for patient, family, and caregivers. Each room contains separate TVs for patients and family; a convertible bed for sleepovers; and plenty of amenities, such as a kitchen table, reading light, and a speaker pillow with nurse call technology for parents. In-room staff workspaces are supported by patient care boards and patient documentation computers.

The building itself is broken into clusters of eight rooms in a neighborhood configuration on each unit, supported by individual team stations and separate medication and storage rooms. All floors include public and staff traffic thoroughfares to control noise and improve infection control.

The hospital expansion will include a new 4-bed epilepsy monitoring unit (EMU) replete with present day technologies and expertise to support a robust inpatient epilepsy program. Another hallmark of the project is an expanded emergency department that nearly doubles the size of the existing hospital’s capacity. The zoned emergency department will house 44 care rooms, including 24 acute exam rooms, nine observation rooms, nine fast-track rooms, and two trauma rooms. Like the inpatient rooms, ED exam rooms feature distinct patient, family, and caregiver zones, with sliding glass doors to provide both privacy and clear sight lines for staff. Neonatal care and cardiac care are the only two areas that will stay in their current space. All other units will move to new rooms. 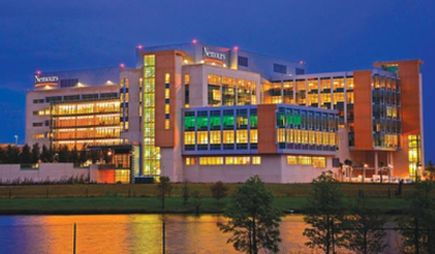 Nemours Orlando
In October 2013, Nemours celebrated the opening of the Delaware hospital’s sister-facility, the 650,000 square feet Nemours Children’s Hospital, located on the Lake Nona medical campus in Orlando, Florida. The opening of the new, $380 million hospital in Orlando made Nemours the only pediatric health system in the nation with two freestanding children’s hospitals.

Internationally recognized for excellence in patient care, education and discovery, we offer the next generation of health care professionals the opportunity to advance their training at the bedside, as well as in the classroom, the laboratory and the community — alongside some of the finest pediatric practitioners in the country.

Our world-renowned Department of Pediatrics offers excellent care and leadership across all of our divisions, including our newest medical services: Transition of Care and Palliative Care. 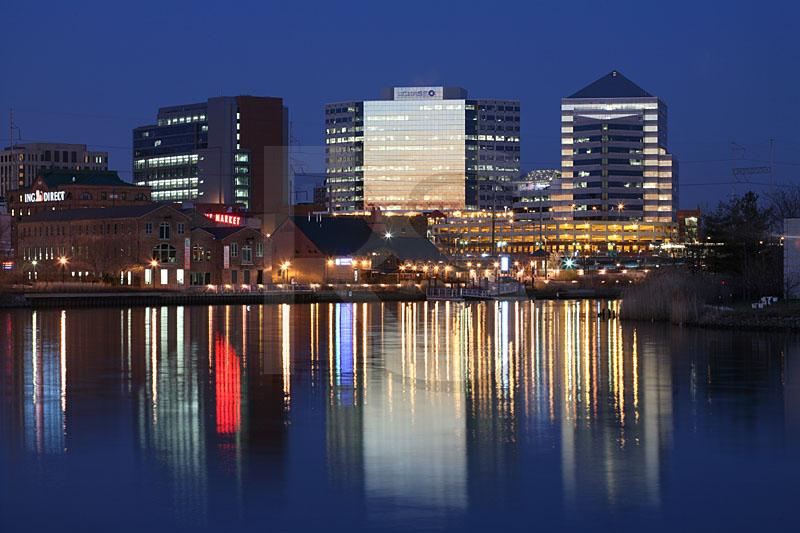 Location – Wilmington, DE
Over 100 million people live and work within a 350 mile radius of Wilmington. A conservative estimate for the pediatric catchment population including Delaware, Philadelphia and south New Jersey is estimated at 5 million people. Wilmington is often referred to as the “corporate capital of the world”, due to the fact that over 50% of all Fortune 500 companies call Wilmington their corporate home.